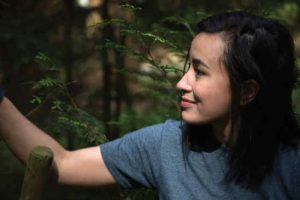 Masters student Seraphine Munroe is the first recipient of a new student award for indigenous graduate students. TimberWest Forest Corporation, partnering with the Faculty, has created an endowment that will generate scholarships in perpetuity through interest revenue.

Seraphine is focusing her research on forest resource management, specifically the impacts of tenure rights granted since 2010 on BC First Nations. “I want to better understand these policies and how they are working on the ground in communities,” she says. She is part of the Forest Resources and Environmental Services (FRESH) Hub in the Faculty of Forestry.

Seraphine was born in Prince George and raised around Fort St. James. A member of the Dakelh and Sto:lo First Nations, she is also part of the Maiyoo Keyoh Society.

“My siblings and I grew up around the bush in our traditional territory, with lots of time at the cabin with my grandparents,” she says. “When I was eight years old my grandmother asked my father for help to stop the logging in our territory. I think I became an activist right then.”

From age eight to 20, when Seraphine wasn’t in school she was doing research and advocating for her family group’s claim over their traditional territory (keyoh). “We wrote publications documenting our historical occupation of the land. We developed forest management plans. And we did blockades,” she says. “It’s been a long process but we are getting there.”

The influence of her family’s history led Seraphine to study anthropology, geography, history and archaeology at Thompson Rivers University, where she received a BA in 2014. She then attended Archaeological Field School at the University of Northern British Columbia.

After a couple of years working as a professional archaeologist, Seraphine began looking for a way to be more influential in the forest management process. “I got in touch with Forestry at UBC to see what more I could do with a Masters degree to help mediate the rights of First Nations,” she said.

Seraphine is examining the efficacy of collaborative forest management plans and their implementation processes. “Right now I’m interviewing indigenous forest managers and provincial government staff involved in indigenous affairs and forest management. The next stage is to analyze all the data for thematic content,” she says.

“This scholarship gives me a huge sense of relief. In addition to studying, I am working part-time, and my younger brother who is in high school is living with me right now. The financial aspect of it is really helpful,” she says. “It’s also great to have affirmation of my work. This support is going to help me get across the finish line.”

Domenico Iannidinardo (BSF 2001) is the Chief Forester and Vice President Sustainability at TimberWest, and was instrumental in creating this award. “The future of forestry includes remarkable students like Seraphine. I’ve seen the forest industry adapt and lead on important stewardship matters since my time at UBC, including those that will define our generation, such as climate change and indigenous reconciliation. Congratulations to Seraphine; I am excited to know that she will be dedicated to the big issues of modern forestry.”

The Faculty is matching TimberWest’s gift dollar-for-dollar, creating an endowment valued at $100,000.